A hundred years ago, the mysterious figure of Brilliant Chang emerged from the moral panic about drugs, nightclubs and young women that was triggered by the death of the nightclub dancer Freda Kempton. The title of ‘Dope King’ stuck to him throughout the 1920s, after his imprisonment for cocaine possession in 1924 and subsequent deportation. He was even claimed to be the ‘Dope Emperor of Europe’. But did he really deserve to be crowned?

It was said that he controlled 40 per cent of London’s drug trade. But a lot of other things were said about him too, most of them lurid fantasies. Chang was a mysterious figure, for sure. He certainly seemed to be up to something, with his elegant clothes, his obscure background and his stock of pre-prepared notes inviting ‘Dear Unknown’ women to dine with him. He had to quit his Regent Street restaurant after several of his staff were caught selling cocaine to women nearby. In 1917, his name came up in connection with opium smoking at a restaurant in Birmingham – the historical basis for his appearance as a character in the TV gangster drama Peaky Blinders. A pattern emerged from the reports connecting him with drugs and young women.

It’s also true that drug convictions declined markedly in the years after he was jailed. But there’s no evidence that his removal from the scene caused the decline of London’s first drug underground. It was suppressed by street-level police work, arresting petty dealers one by one. By November 1923, several months before Chang was finally caught, the Times declared that the cocaine traffic had been checked. The police action was effective because the drug trade was modest in scale and largely confined to the West End of London. There is no evidence to support the idea that major syndicates or traffickers were behind it. Brilliant Chang was not the ‘Dope King’ of London – and nobody else was either.

The dope story demanded one, though. Thanks to the novelist Sax Rohmer and his character Fu Manchu, the idea of the evil ‘Oriental’ criminal mastermind had lodged in the public’s imagination. From the moment that Brilliant Chang appeared at the inquest into Freda Kempton’s death, it was inevitable that the well-dressed restaurateur would be cast in the role.

Despite having been pointed to a guilty verdict by the judge, the jury took just fifty minutes to acquit de Veulle (though he was jailed for supplying cocaine). The jurors evidently weren’t persuaded that he caused her death through negligence.

They might have at least spent a little longer before filing back into court if they had seen an article that the New York Evening World ran in 1908, which Kevin Taylor has brought to light in his website devoted to the American socialite, heiress and scandaliser Aimée Crocker. By his own boast, when it came to hosting opiate-based pyjama-dressed social occasions, Reggie de Veulle had form.

Back then, de Veulle caused a minor scandal performing a ‘naughty wiggly dance’ in a show called ‘The Queen of the Moulin Rouge’. Crocker held a dinner in his honour, and he teased the Evening World’s reporter who asked him about a ‘pajama dinner’ he had hosted himself:

”It wasn’t much of an affair,’ he said today. ‘The only novelty was that as soon as a guest arrived he or she was shown in a dressing room where all their clothes were removed and a suit of silk pajamas put on.’ Who were the guests? ‘Oh, really, now, I couldn’t, y’know. Oh, yes, it was rather jolly, but I’ve given much jollier ones in London and Paris. F’r instance, deah boy, in London I gave a ‘morphia dinner,’ where every one took morphine with the liqueurs. It would have been a ripper, y’know, but one of the men had a weak heart and nearly died. Most unclubby of him. I intend to give some smashin’ original dinners while I am here.”

It was a real pleasure to speak about jazz and the pursuit of pleasure at Two Temple Place last night. A wonderful audience in a perfect setting, surrounded by vivid and evocative relics of the Jazz Age. Thanks to everybody who came along, and everybody who helped make it possible.

Britain at large wasn’t ready for the arrival of jazz in 1918, but the music took hold in a cluster of West End sites – some exclusive, some underground, and all dedicated to the pursuit of pleasure. I’ll be talking about where jazz took hold as part of Two Temple Place’s Rhythm and Reaction: The Age of Jazz in Britain exhibition programme: Monday 26 March, 1830-1930.

To my surprise and delight, I came out of an antiques market yesterday with a copy of Play Pictorial magazine that had been waiting who knows how many years for me to happen upon it. The featured play is Freedom of the Seas, in which Billie Carleton appeared the night before her death in November 1918 from what the ensuing inquest ruled to be a cocaine overdose. She was the female lead, but the cast’s other actress had the livelier part. 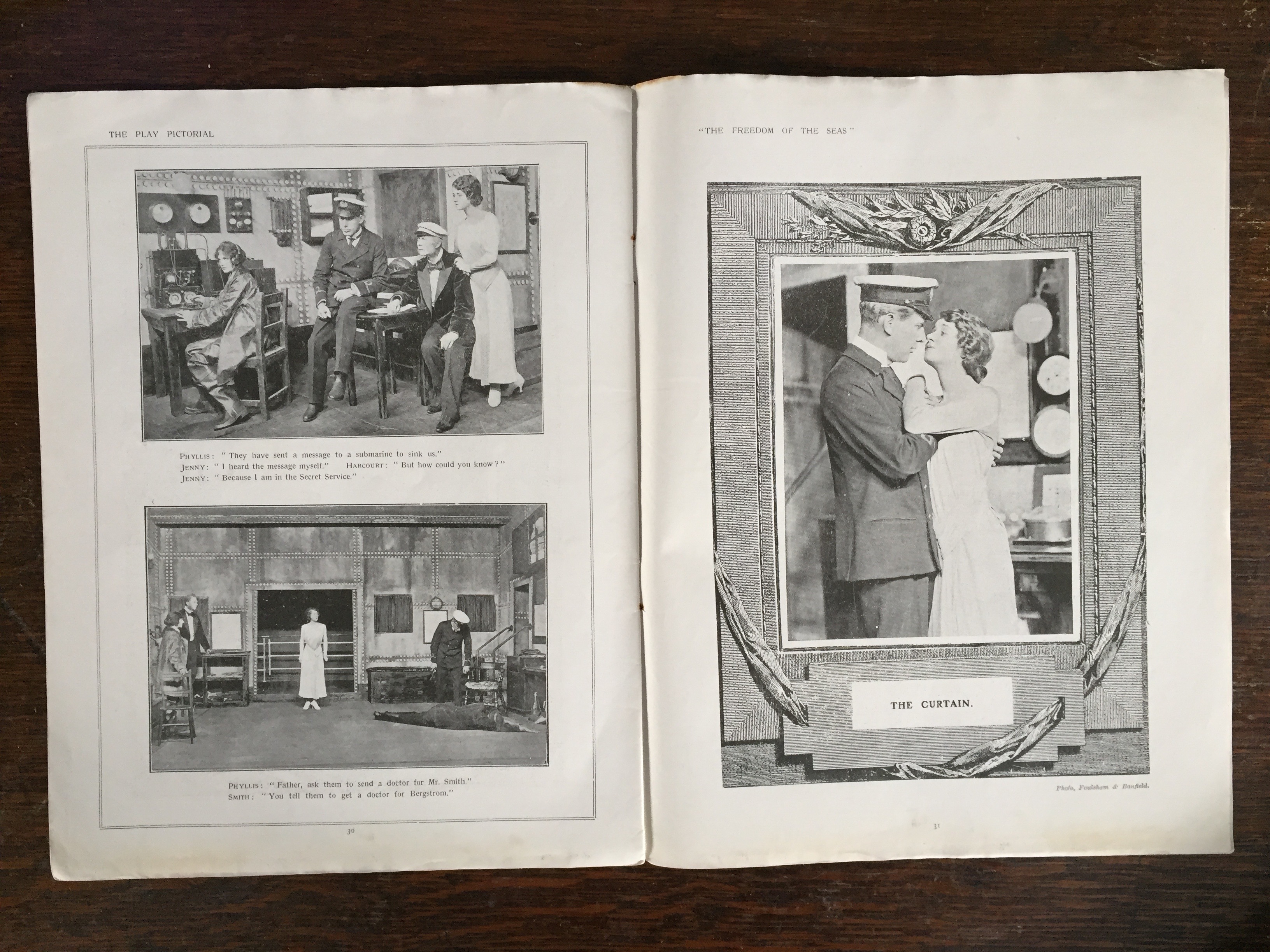 Carleton played an old-fashioned kind of young woman – as she seems to have done in her life offstage. ‘I fancied somehow that a woman could only find happiness with the love of a strong man who dominated her,’ her character says, and eventually does.

The other woman on the stage presents a much more modern image of womanhood – dressed for action in oilskins, trained as a wireless operator and serving, it turns out, as a Secret Service agent. She was played by Marion Lorne (who was married to the play’s author Walter Hackett).

Lorne achieved her greatest fame much later in her career with a character who also possessed special and secret abilities – Aunt Clara in the 1960s TV series Bewitched. But although the show was subversive in its own fluffy way, Clara’s enchanting niece Samantha being the real power in her suburban dream-home marriage, empowerment wasn’t extended to the older woman. As far as the scriptwriters were concerned, old meant confused, and that was comedy in those days.

On the other hand, Lorne’s career trajectory defied the obstacles that the entertainment industry puts in older women’s way. It started before the first world war and peaked more than twenty years after the second.

A hundred years ago this month, there were no illegal drugs in Britain. A hundred years ago next month, the unauthorised possession of cocaine was made an offence under wartime emergency regulations. This was the beginning of the prohibition regime under which drugs have been controlled ever since.

The ban came after a florid panic, centred on the West End of London, about the use of cocaine by prostitutes and soldiers. To mark the centenary, I’m tweeting on-this-day headlines and quotes.

The first is today’s story from the London Evening News: ‘Practically unknown a few years ago, cocaine-taking has spread like wildfire in all classes of the community.’

There’ll be a mid-June flurry, then the story really gets going next month. Follow it  @marekkohn, #DrugBan100.

Honoured and grateful to presenter-about-town Matthew Sweet and impresario-producer Phil Tinline for the opportunity to make my debut as a variety turn at the BBC’s Maida Vale studios last night. Matthew compered his Palace of Great War Varieties, a freewheeling tour through the popular culture of the First World War, with his usual aplomb and a stock of jokes a hundred years old. It’ll be broadcast as Radio 3’s Sunday Feature on December 28 from 6.45 to 7.30pm.

I learned a huge amount from fellow contributors Fern Riddell, Helen Brooks, Ian Christie and Neil Brand about music hall, theatre of different stripes and cinema … and was quite carried away by their enthusiasm, a tremendous demonstration of how the period can still speak to us and fire our imaginations.

And what did I bring to the show? Clubs, drugs and a brief tour of the West End finishing at the scene of London’s first cocaine bust, outside what is now the Ivy.  Matthew and I took in Ciro’s nightclub, or rather the National Portrait Gallery archive which now occupies the building, and gazed at photos of its former splendour while standing on what was once the dance floor – boards trodden later in the club’s history by Audrey Hepburn, who danced and sang there in 1950.

Patti Smith turned her show at the Cadogan Hall in London into a William Burroughs celebration on the 100th anniversary of his birth. As she reminisced about loitering in the Chelsea Hotel lobby in order to pounce on him when he left the bar next door (‘My dear, I’m homosexual,’ he had to explain) it struck me that she’s just three degrees of separation from Reggie de Veulle, the louche anti-hero of Dope Girls.

It goes like this: In London during the First World War Reggie knew (and maybe bought cocaine from) the mysterious Don Kimfull, who I believe was ‘Joseph Dean’, the legendary proprietor of Dean’s Bar in Tangier, who met (and took a dislike to) William Burroughs, who became friends with Patti Smith in New York.

Oh, and she did ‘Birdland’ like it had just come to her, in a vision.

I’m delighted to be able to announce that the good people at Granta have made Dope Girls available as an ebook. You can download it from sellers such as Kobo and Amazon.

I rather like the idea that as it heads into its third decade, Dope Girls has taken a form that the people it’s about wouldn’t recognise. But if you’d like a traditional paper copy, just order it online – here, for example – and the system will run one off for you.

Once upon a time, the Thames-side town of Maidenhead was an alternative destination to Monte Carlo or Park Lane for wealthy pleasure-seekers. Reggie de Veulle, glimpses of whose character and exploits are visible in the posts below, was said to have attached himself to one such host for a season that came to an abrupt and scandalous end.

According to ‘Reggie Lindsay’, de Veulle’s barely-disguised avatar in the 1912 novel Les Fréquentations de Maurice, the host spent £300 on a ‘chic soirée’ complete with a Gypsy orchestra, Japanese lanterns in the garden, and orchids throughout. As an enthusiastic cross-dresser, he took similar trouble over his outfit, greeting the forty fashionable guests Reggie had invited in a blue chiffon gown with antique lace trimmings and a four-metre train. After supper, he tossed flowers, fruits and coins to the locals who had gathered to listen to the revels. Stones started to fly through the windows and the police intervened; Reggie made his escape by boat.

Reggie admitted his anxiety that his ‘uncle’ Alec would be angry with him over the episode – but he didn’t admit that, as rumour had it, he himself had been in drag. When that came up, he whisked his guests out of the door with uncharacteristic alacrity.

It’s rather satisfying for me to be able to report this after more than twenty years wondering where the tale was hidden; and that it was in the British Library all along. It’s equally pleasing that Reggie claimed the incident had been reported at length, with all the names, in two periodicals. The story is still to be continued. 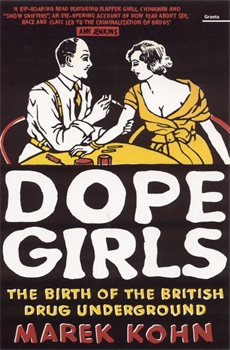 Dope Girls: The Story So Far

Dope Girls, published by Granta, is about the beginnings of underground drug use in London during the First World War and its aftermath. The first British drug panic turned on fears about the behaviour of young women, and their contact with ‘men of colour’.

Since the book first came out in 1992, new details have come to light and new perspectives on the past have taken shape. This blog is here to keep telling Dope Girls stories as they unfold.